Who’s lucky? The staff of Lucky 32. They now own the business. 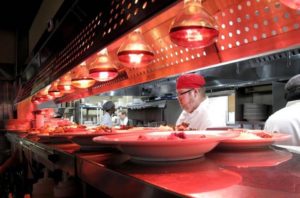 CARY – Tyler Psaroudis, a server at the Lucky 32 Southern Kitchen, just became part-owner of the Greensboro business that operates that restaurant — as well as three other eateries and two hotels — without lifting a finger.

Instead, the heavy lifting – in fact, all of the lifting – was done by the former owners of Quaintance-Weaver Restaurants and Hotels, who this week notified the business’s 600-plus staff members that they now collectively own 100 percent of the company. Co-founders Dennis Quaintance and Mike Weaver accomplished that by selling their business to an Employee Stock Ownership Plan, or ESOP.

Dennis Quaintance
Dennis Quaintance Chris English Quaintance-Weaver Restaurants and Hotels
“It’s pretty cool stuff,” said Psaroudis, 26, who has worked at the 80-employee restaurant for all of four months. “I’m excited to be a part of something like this because I do think it is moving the industry in the right direction because it is leading by example.”

The key benefit for workers, other than bragging rights, is the creation of a retirement fund whose value is determined by the business’s profitability.

“This isn’t something where you go around and say, ‘Hey, I own a part of a company and I’m going to buy a new car,’ ” Quaintance, who continues as CEO despite the change in ownership, told a group of Lucky 32 employees Friday morning when he unveiled the ESOP. “This is a marathon, a really long marathon, that we run together.”

Although everyone knows there is no such thing as a free lunch, it turns out that, with an ESOP, there is a free retirement plan.

“It’s so neat because we don’t put money in it,” Quaintance told the group. “You gain your participation by working.”

Nationwide, according to the National Center for Employee Ownership, there are in the neighborhood of 7,000 ESOPs, which are highly regulated by the federal government. Among the best known: Publix Super Markets, Avis, the Omaha World-Herald newspaper and publishing company W.W. Norton.

The roots of the Greensboro business go back to 1988 when Weaver, Quaintance and Quaintance’s wife, Nancy King Quaintance, co-founded the company. It opened its first restaurant in Greensboro the following year and now owns two Lucky 32 restaurants – the other is in Greensboro – two other restaurants and two Greensboro hotels, the O. Henry Hotel and Proximity Hotel.

The business in thriving, said Quaintance, ranking among the top 25 percent in the industry in key metrics such as revenue per square foot and profit per dollar of revenue.

The ESOP acquired the business from the owners at an undisclosed price that was negotiated with a trustee whose fiduciary duty was to the staffers. The money to buy the business was loaned to the ESOP by the owners, who will be paid back over time.

“If the business does well, great,” Quaintance said. “If it doesn’t do well, then these loans don’t get paid.”

Staffers who work more than 20 hours a week become fully vested in the retirement plan after three years. In addition to being affected by the company’s overall performance each year, benefits are also based on an individual’s wages, bonuses and tips.

Quaintance said the owners didn’t explore selling the business to another buyer because they were enamored with creating a retirement plan for staffers.

“We get that we are sort of standing on people’s shoulders as owners,” he said. “And we so appreciate it, that it got us where we are.”

In addition, he said, “We are able to sell the company to an owner that shares our values … It seems a little bit too good to be true.”

Those values include a sense of “fairness” to staffers, said Daniel Thomason, 29, the dining room manager at the Lucky 32 in Cary.

“This company is so flexible helping people deal with all of their issues,” Thomason said.

Just this week, he said, a young server came up to him and told him that her babysitter had quit and consequently she wouldn’t be able to make her morning shift.

“Ultimately we made this whole situation work so that this young lady could be with her child” that day, he said.

Quaintance, who said he has no plans to retire and likely will “die in the saddle,” is looking forward to running a business where the interests of all the staffers are fully aligned.